Those were two days of intense exchange of experiences, stories, history and, of course, lots of recipes

On February 12th and 13th, the first Instituto Brasil a Gosto Expedition trip to a quilombola community at Vale do Ribeira (in São Paulo region) took a group of 16 people, among chefs, cooks, journalists, photographers and film-makers to experience intense interactions that brought a lot of knowledge to everyone.

Our goal: to visit Quilombo Ivaporunduva and Quilombo São Pedro to better understand the community work and production dynamics , try out ancestral recipes, register all those interactions to share this experience later with other people and to create projects that could be positive for these local communities. 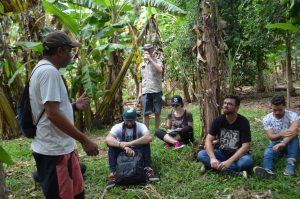 For two days, we visited organic plantations of rice and bananas, attended a medicinal herbs workshop, discovered new recipes, ingredients and had the opportunity to take part in a planning meeting mediated by Instituto Socioambiental to discuss the quilombola’s agriculture system developed in that region, which happened at Quilombo São Pedro.

Ivaporunduva (a word with origins in the indiginous native languages and that means “river full of fruit”) is in the city of Eldorado (São Paulo region), on the banks of the river Ribeira do Iguape. The quilombo was settled  in 1690, when the widow who owned the land died, leaving no heirs. Left to their own devices the enslaved people ran away and founded the quilombo. Little by little other enslaved people, running away from mining duties, went into the forest and built their own free communities. It was not until 1968 that a road was built to connect that place to the rest of the region and it was only in 2010 – barely 10 years ago – that the community got the registration of land ownership.

“The quilombo land is collective. What we have made here is ours and we share the cake between everyone”, explains Ditão, one of the community leaders. Today, Ivaporunduva has 110 families that live from Family farming, producing mostly certified organic bananas. Their usual harvest is about 600 boxes of 20 kilos per week, all sold to municipalities in São Paulo estate. “We don’t suffer from hunger here because we own this land”, said Setembrino, another community leader that was with us. And it is true. Only a small part, around 20%, of everything they consume is bought from other places.

During those two days we had the chance to taste some of the most common recipes and ingredients used there such as maná cubiu (a fruit known as indigenous tomato), taioba (a leaf), coentrão (a plant that tastes like coriander), free range chicken, piled rice, different ways of using bananas (chips and farné,  a sort of cake made also with corn), rice cuscus with peanuts and manioc biju. During the evening, one of the most interesting experiences of the trip happened when the cooks (only women command the quilombo’s kitchen) talked about recipes, stories and flavours they learned there. Everyone ended up in the kitchen, of course, trying out new and old flavours.