In his third day in the office, President Jair Bolsonaro created a provisional measure that removes from the CONSEA (Food and Nutrition Security Council) the assignment of proposing to the federal government the “guidelines and priorities” of the national food and nutrition security policy and plan.

CONSEA was a direct advisory body to the Presidency of the Republic since its creation in 2006. According to the organ’s own website, it is defined as “an institutional space for social control and participation of society in the formulation, monitoring and evaluation of policies of food and nutrition security, with a view to promoting the progressive realization of the Human Right to Adequate Food ”. The council was formed by A third of government members and two thirds of members of the civil society.

Chefs, cooks, family farmers and other people involved within the food sector are against that measure (and the subsequent extinction of the council) and had decided to unite in another Banquetaço on February, 27th(Wednesday), in several cities around the country. The idea of the event is to protest against the government’s decision, distributing food in public places. “With the end of CONSEA, all the dialogue that has existed in the last 25 years, between civil society, government, NGOs and educational institutions will end. The government is weakening the food issue, the discussion about bringing real food, with organic choices, native to the quilombolas… CONSEA was a protection for this dialogue, with encouragement, concern and caretaking. It’s very sad, but I think we can reverse that with the movement”, says food educator and cook Leila D, one Banquetaço’s organizer.

This is the third time Banquetaço is held. The movement was created in 2017, in defense of the Human Right to adequate food, bringing together farmers, nutritionists, cooks and activists in front of São Paulo’s Municipal Theater. On the occasion, two thousand free meals were served from food donated by organic farmers and entrepreneurs, as well as food that would be discarded by Ceasa (local national supply centers).

This year, the demonstration will take place in several cities across the country. Here’s the list: 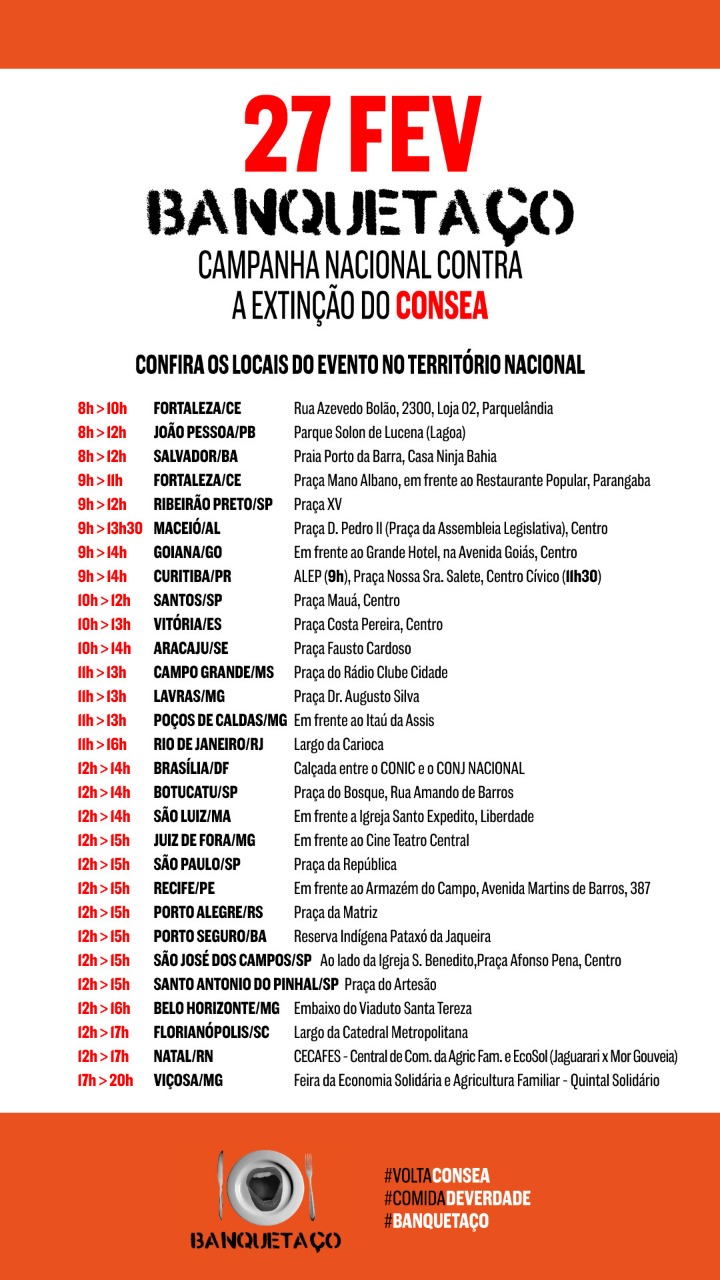