These savoury and sustenance dishes deserve to be in the menu, even for those who do not suffer from gluten intolerance

If you can only think of boring and insipid gluten free recipes, think again. Brazilian cuisine has a lot of delicious options without gluten. Here are some of them: 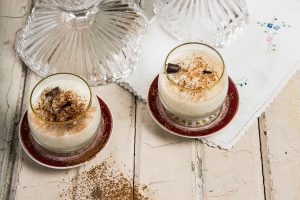 You might not have imagined that a recipe made with rice, whole milk, sugar, butter and eggs could be gluten free, but it is. This success from Festas Juninas can be in your choices more often if you need to go gluten free 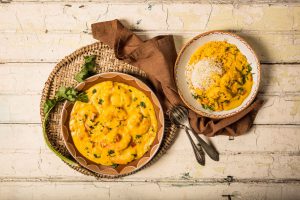 The name is an indication that is gluten free. The word “bobó”, which has fon origins (one of the languages spoken in Benin), refers to a cream made with yam, manioc or breadfruit. This is a symbol from Bahia’s cuisine that mixes coconut milk and palm oil and is a good option for those who suffer from celiacs disease. 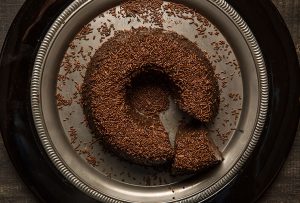 Gluten-free dessert? We have it! This  Brazilian favourite is some sort of brigadeiro pudding, made with milk, eggs, sugar, vanilla and chocolate.

This is a rich and strong preparation that could take 5 hours to be ready, but it doesn’t have gluten in any of its 16 ingredients (which includes goat viscera, lime, peppers, vinegar, mint, coloral, manioc flour).

“This recipe has made me want to learn how to cook. When Mrs Altina cooked the piglet for supper, the old ones were served first and only after them, the kids could be served. When my turn came, there was always only meat left, the crackling skin was all gone. When I started cooking, I gave myself the right of having some crackling skin first”,says Ana Luiza. And you can also do it, because it is gluten free. 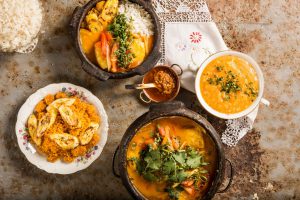 A good moqueca is made with fish, lime, oil, annatto, onions, garlic, tomatoes, coriander, spring onions, salt, pepper and no gluten. This traditional recipe from Espírito Santo deserves to be made at your home.